Oh Paris.  The city of love, the city of light and perhaps one of my favourite cities in the world.  Even on what was my 4th visit to the famous Parisian city, I was able to experience some memorable firsts and see the sights from a new perspective. 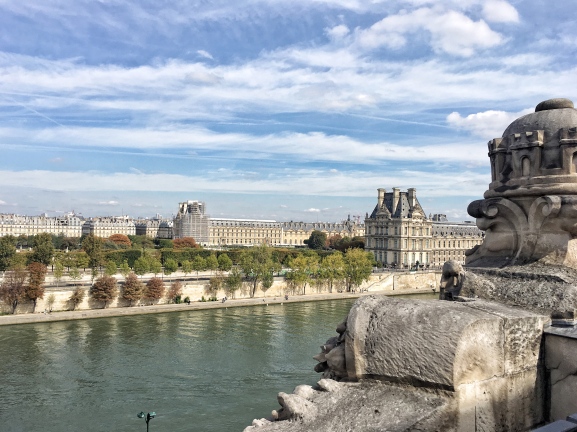 During a 10-day excursion to Europe this past September, my bestie and I planned for a 48 hour stop (probably more like 36 hours) in Paris.  It was her first visit so I considered it a personal mission to make sure she experienced the magic of the city and saw as many of the beautiful sites as possible.  I had given an express tour once before so I knew just the route to take so we could maximize our time.

If this is your first time in Paris, the most important thing you need to know aside from how to say wine in French, is the word arrondissement.  In French, arrondissement refers to a city district.

I’ve probably spent most of my time in the historic centres but I’m sure I’ll get the chance to explore some of the other ones sooner than later.  I’ve provided a quick snapshot of all the arrondissements and what to expect from each at the end of this post.

My favorite part of traveling is getting to experience a city like a local.  The last time I was in Paris I rented an adorable Air BnB in the 2nd arrondissement (Les Halles) which was surrounded by restaurants, bars and little boutiques.  After 3 days, I had my go-to coffee shop and the streets felt like home.

This most recent time we stayed an area called Le Marais which stretches across the 3rd and 4th arrondissement and our hotel was right on the border with the 11th.

We stayed at Les Jardins du Marais, a more modern style hotel with clean, decent sized rooms.  The selling point for this hotel was the courtyard.  I swear if the weather had been warmer I would have spent a lot more time just lounging here.  The overall area was super cute, easy to walk through and close enough to the major sites you’ll want to see without feeling like you’re stuck in a tourist trap. 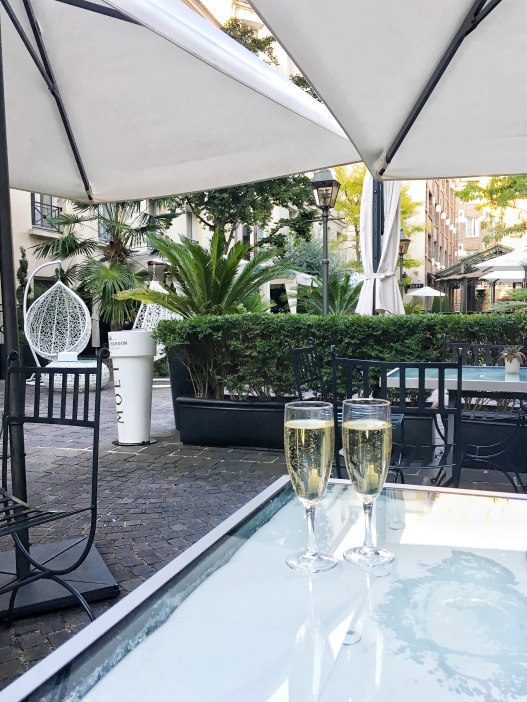 The price difference between Air BnBs and hotels isn’t too drastic so it’s really about your personal preference.  If you have more time and want a local feel then I’d go for the Air BnB.  But then again, who can so no to clean towels and getting your bed made.

What To Do
Here’s my express tour to see the most with limited time:

From wherever in the city you are staying, find yourself on the Rue de Rivoli which is one of the most popular and famous streets in Paris.   You’ll see some beautiful architecture, well known shops and cafes at every corner.

Where Rue de Rivoli intersects with Rue du Temple you will have arrived at the Hotel de Ville which is the building that houses the city’s local administration.  It’s a architectural dream with intricate sculptures carved into the building, fountains and historical statues. 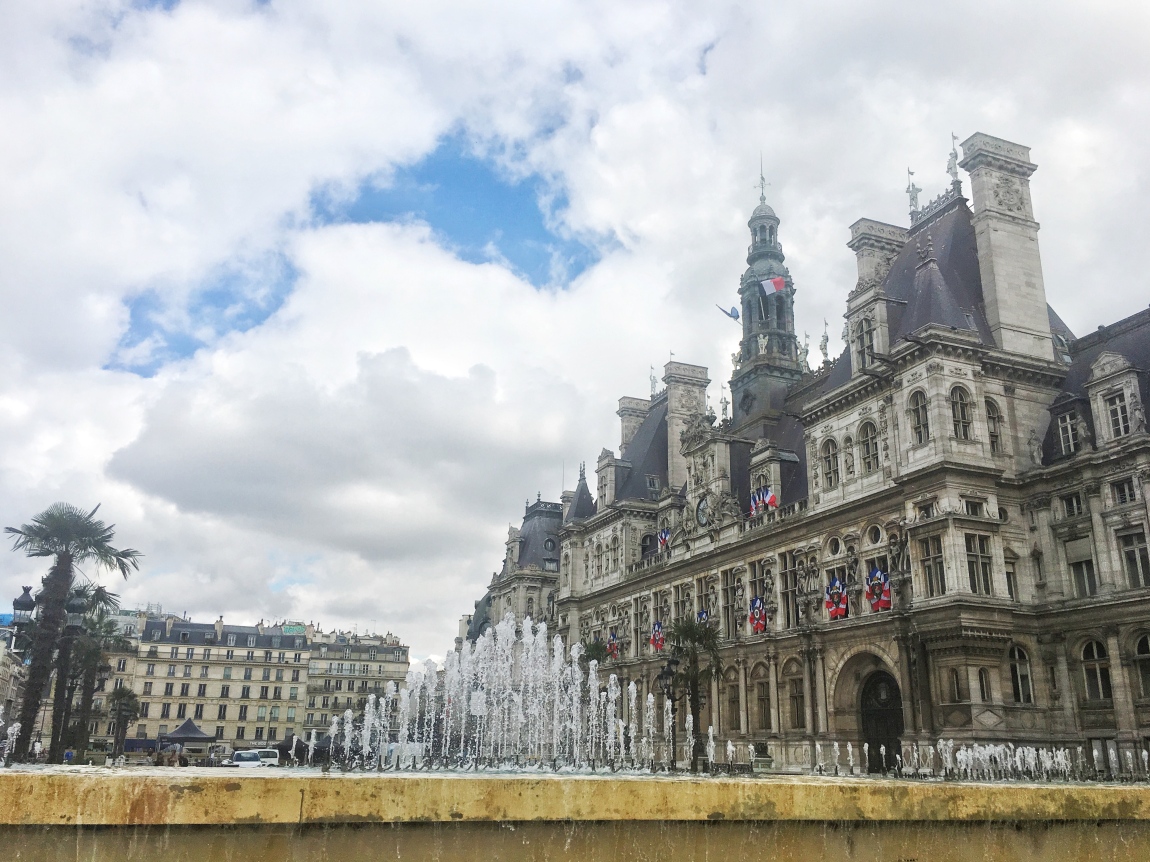 After walking through the courtyard of the Hotel de Ville you will have arrived at the edge of La Seine where there are a number of bridges you can take over to the other side.  Walk across any of the bridges close-by and follow the signs to reach the Notre Dame Cathedral.  Known for its famous gothic style architecture it is probably one of the most well-known churches in the world.  You can take a tour of the cathedral which I’ve never done or just get a selfie like all the other tourists.

Walk down the river for a while and you’ll see street vendors and artisans selling all kinds of art and souvenirs. Keep walking until you hit Pont Neuf, which is the oldest standing bridge across The Seine, or Pont des Arts to cross over to the other side.  You will have now hit The Louvre. 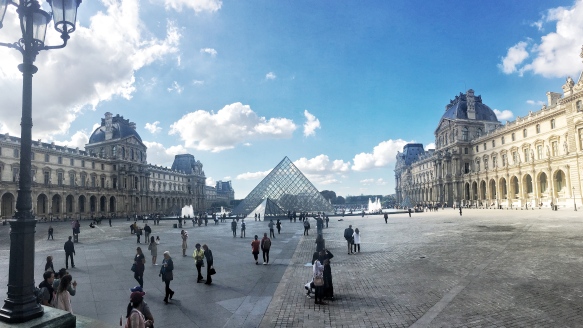 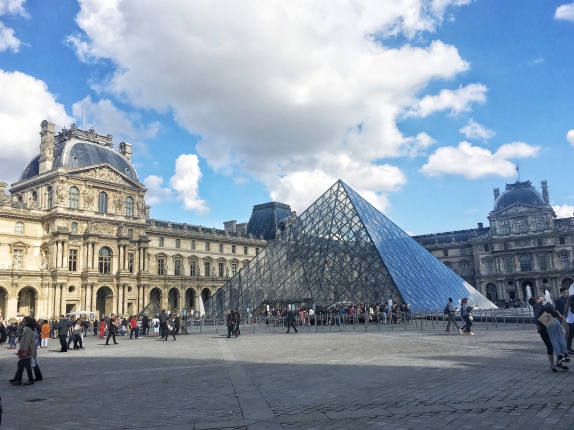 Walk THROUGH the Louvre.  When you come back with more time then you can spend an entire day there.  If you really want to spend time at a Museum then go to the Musee d’Orsay.  It was actually my personal favourite of the two.

After walking through the Louvre you’ll hit some big sights pretty quickly.  Place du Carrousel first and then one of my favourite spots in the city, the Jardin des Tuileries.  Next time I come to Paris I vow to spend an entire afternoon just reading and drinking here.  It’s just breathtaking.  You take a minute to realize that you are standing in this expanse of a beautifully curated 17th century garden surrounded by what used to be palaces for royalty in the 15th and 16th century.  Unreal.

After walking through the garden you will hit the Place de la Concorde and finally the Avenue des Champs-Elysees.  The avenue is mostly known for its cafes, restaurants, shopping and theatres.  Once you reach the end of the avenue, you will find the famous Arc de Triomphe.

At this point your feet will probably be aching and you’ll be thirsty so grab a snack and beverage along the Champs Elysees or at Laduree because you can’t leave Paris without having macrons.

After a little cat nap and down time head over to the 10th or 11th arrondissements for nightlife or Canal St. Martin which is surrounded by bars, bistros and brasseries.

Start your day with heading all the way up to Montmartre to see the Sacre Coeur and some of the most breathtaking views of the city.  There’s a little artist village where you can see people painting and sculpting and really immerse yourself in some of the local art and culture.  Also a great place to buy more unique souvenirs for your loved ones. 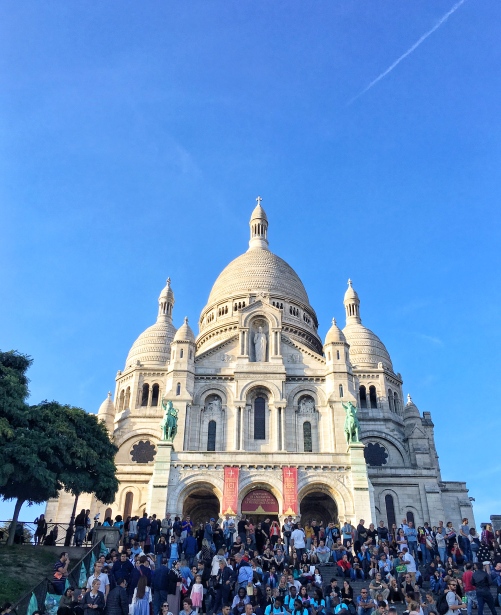 You will have walked a lot and climbed a ridiculous number of stairs so spend the rest of the day relaxing and shopping in St Germain des Pres.  If you still feel like you’re up for walking then this would be a good time to fit in a visit to one of the museums. 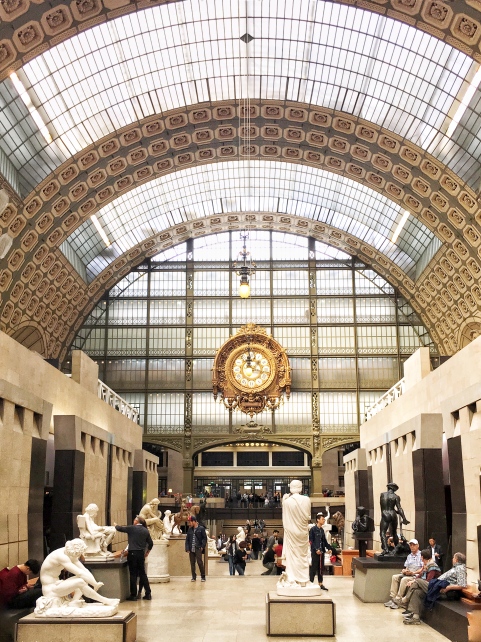 After some much-deserved wine and food end your night with seeing the Eiffel Tower with a Nutella and banana crepe in hand.  If you’re not feeling like you just starred in your own personal rom-com then I’m not sure we can be friends. 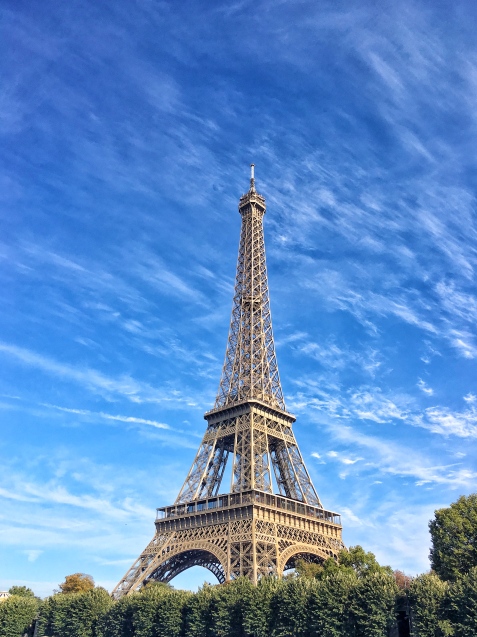 Another recommendation which I discovered on this trip was taking a boat tour.  It was inexpensive and another great way to see the major sights without having to walk or spend a lot of time.  Bonus, you can drink champagne on the boat.

Where to Eat (and not eat)

The first thing you’ll notice about Paris is that there is literally a restaurant on EVERY corner.  Most of these restaurants offer a standard menu and can often be a little on the touristy side but you’ll never really go wrong with the food. I think we ate twice at places like these and frankly, I couldn’t remember the names if you paid me to.

Being the avid researcher that I am I had list of places that I really wanted to check out.  But, with Paris’ ever growing and ever-changing food scene, I’m sure these places will be out of date by my next visit.

Ferdi – most known for being Kim Kardashian’s favourite restaurant in the world. I know, I know.  Bottom line, don’t bother.  It’s pretty much American food with a sprinkling of Spanish tapas all of which I don’t need to be eating in France. 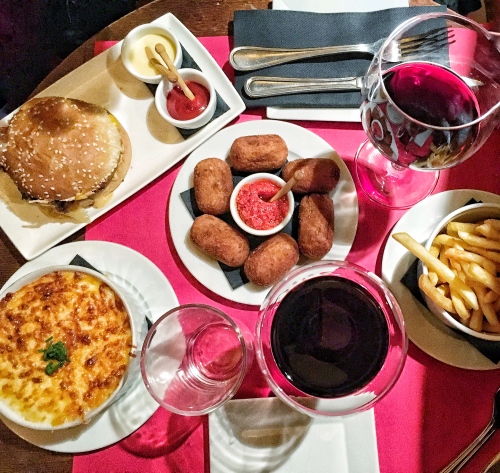 Ober Mamma – part of the Big Mamma group, this Italian restaurant was THE place to be.  No reservations with a constant line up outside the door.  We somehow scored two seats at the bar and then got moved to a high-top table. Even though we only got to order off the bar menu we still had amazing food.  Small tip:  the cheese from the “meat and cheese” selection is literally a FULL block of cheese.  Choose carefully and wisely.

Season – we had brunch here one morning and again, super busy with a constant flow of people coming through the door.  Their offering is a little more on the healthy side –  think bowls, avocado toast alongside a few of the classic breakfast dishes.

Berthillion – we didn’t make it here on this trip but every blog/restaurant site said that this was the spot for the best ice cream in the whole city.

A lovely bartender in Luxembourg also gave us a list of bars to check out in Paris of which we got to all of NONE.

And so, another lovely trip to Paris came to an end after which I fell even more in love with the city that is dripping with romance, history and culture.

I have, however, made a vow to myself.  The next time I step foot on France soil it will be with a male companion.  I love my girlfriends to death but it’s time to experience the city of love while in love.

Till the next adventure!

3rd – Temple & Beaubourg – known as the heart of the city.  Mostly commercial and residential areas.

5th – The Latin Quarter – the center of scholarship and intellectual achievement.  Home of the Pantheon, Sorbonne University, Jardins des Plantes

7th – Orsay, Eiffel Tower, Invalides – one of the most touristy areas of the city, very affluent and prestigious.  Home of the Eiffel Tower and Musee D’Orsay

14th – Montparnasse – Comprising the legendary Montparnasse district, once home to a lively arts and literature scene in the roaring 1920’s.

18th – Montmartre & Pigalle – One of the most popular areas thanks to perfect views of the city.   Village like streets with a deep history in art.  Home of Montmartre and bustling immigrant neighbourhoods such as Barbes and La Goutte d’Or.

19th – Buttes Chaumont & La villette – little interest to tourists however it is going through an urban renewal. Features a sweeping romantic-style park, lively cinemas and a science and industry museum.