If you’re like me then you thrive on having your finger on the pulse of everything new in the city.  I have an ongoing list I keep on my phone of all the new bars and restaurants I want to try and it seems like I can never keep up. Shockingly I was able to visit a place that if you’ve read any recent Toronto based newsletters or food blogs you will have come across the name. Bar Raval.

After much success with Bar Isabel (which I still have not tried), Grant Van Gameren opened up Bar Raval at the corner spot of College and Palmerston which was once occupied by Teatro.  Bar Raval is a Spanish pinchos bar (otherwise known as tapas) serving up small, simple dishes meant to be paired with your drink of choice. Like I said, I had heard so much about this place that when the opportunity to go for dinner came up, I had to check it out.

Upon walking in you are instantly overwhelmed with the incredibly intricate architecture of the space.  Inspired by Spain’s own Antonio Gaudi, every inch of Bar Raval is carved out with curvy, smooth wood finishes that you can’t take your eyes off of.  From ceiling to floor it is a feast for the eyes. 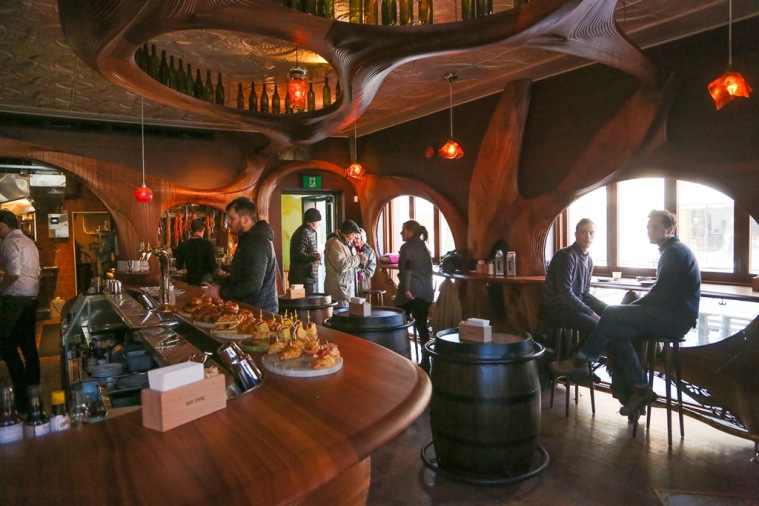 The other thing I quickly realized upon walking in, which was at 5:30pm on a Monday, was that there was barely any seats!  Thank god we snagged a few otherwise we’d be left standing near barrels that double as tables or at the bar.  This is however part of the intention.  Its not meant to be the place that you dine for hours but the place where you stop in with a few friends for a quick bite and drinks and then head out to your next stop.   The place was PACKED.  Did I mention what time we were there?  We took advantage of the fact that we had seats and actually were there for a good 2 hours but the space next to me turned over 4 times.  I do have to say people are quite respectful of the fact that it is a small space and give you your room to enjoy your bites.

The menu is primarily in Spanish so unless you bring someone who can translate you’ll have to rely on the highly knowledgeable, charming and very friendly staff.  We tried Googling some of the words and failed miserably.   After much explanation we ended up ordering:

The Kitchen Bread came in three pieces and was as if someone made an amazing  spread out of bruchetta topping (with so much more garlic), covered a piece of thick warm bread and toasted it.  To die for.   Olives were standard. 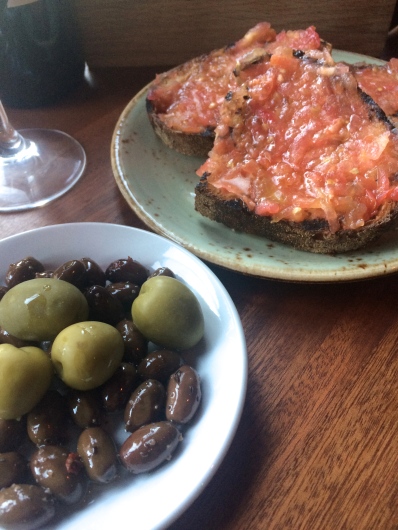 The meat and cheese servings were extremely generous.  We didn’t anticipate how much was going to be served and in all honestly we were full before our other courses arrived.  The Manchego had a texture and taste similar to a parmesan while the Torta de Dehasa was a little more along the lines of a soft blue cheese.  I’m usually not a fan of the funky blue cheeses but this one had a softer flavour to it and spread very easily over the bread.  Once I saw Chorizo on the menu it was a no-brainer.  The thick cut slices and after bite of spices – perfect with our cheese pairing.  The Lomo Bellota was a little tougher and milder but again paired nicely with the stronger cheese. 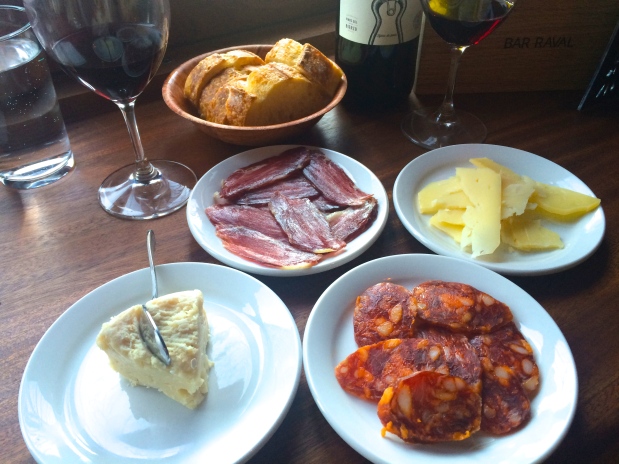 Next up was the Croquetas which literally just melted the second you bit into them.  The outside was slightly crispier then what I’ve had before and the cheese filling had a soft taste without being too overwhelming. 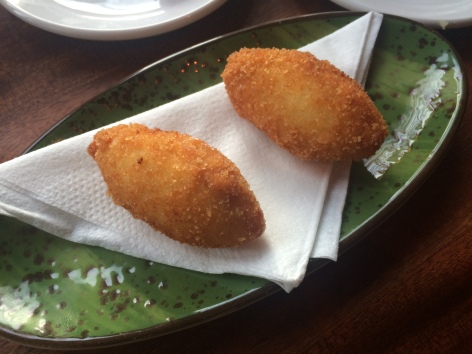 Now my favourite dish of the night.  The Mushroom Tower.  Just by the name I had high expectations and every one of them were met the second the plate hit our table.  A piece of toasted bread, topped with three plump, buttery, garlic infused cooked mushrooms and then finished with a cold mini shrimp.  Unbelievable.  I did have to dissect the tower in order to eat it but every bite was unreal.  Not to mention that the butter/garlic mixture that the mushrooms were cooked in seeped into the bread.  I will dream about this. 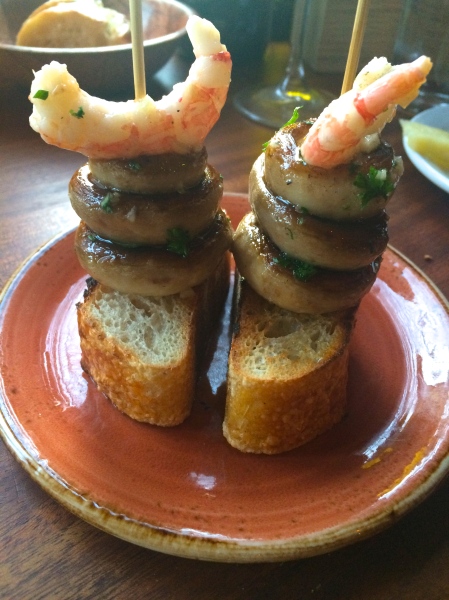 And finally we ended with the grilled octopus which is usually not my preferred choice of seafood (tried it for the first time at Portland Variety) but thought why not give it another whirl.  This one was tossed in a lemon based vinaigrette and cooked without the pieces getting chewy.  I think I still can’t handle the texture of octopus regardless of how its cooked but definitely a worthy dish if its your thing. 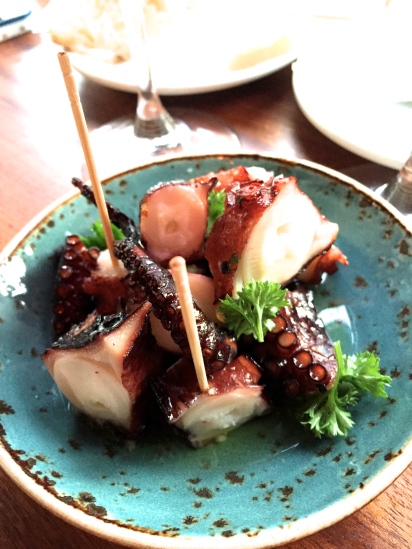 So what can I say overall – definitely worth trying. Every dish tasted authentic and was pieced perfectly in small portions.  Just be prepared not to have seats and potentially only have the patience to try 1-2 dishes.  I am also super curious about their breakfast offerings since they open at 8AM and maybe a lunch date might help me overcome the eating while standing thing.  Oh and once the patio opens this summer, I’m sure getting a seat will be that much harder.