So I’m starting to believe that Charles Khabouth/Hanif Harji and Ink Entertainment are basically going to take over the city.  Which in all honesty I’m fine with because I don’t think I’ve ever been disappointed when eating at any of their establishments.  If you’re familiar with them, they are the masterminds behind: Patria, La Societe, Spice Route, Byblos, NAO and Weslodge.  Not to mention maybe half of the nightclubs in the city.

Their most recent adventure opened up a few months ago and goes by the name Figo featuring classic Italian fare inspired and driven by seasonal ingredients.  I had heard some great things during the initial opening so on the list it went.

The first thing you notice when walking up to the expansive space at Adelaide and John is  how BEAUTIFUL it is.  There really is no other word.  Compared to a lot of the dark, heavy, dim lighted restaurants that have taken over the scene lately, Figo boasts a very light and bright aesthetic with their main color palette being made up of pastels and white.  The space itself is also quite impressive with concrete pillars/floors and a stunning floral motif adorning the entire ceiling.  Most of the back-wall is taken over by a bar and off to one the right side is an open style kitchen. 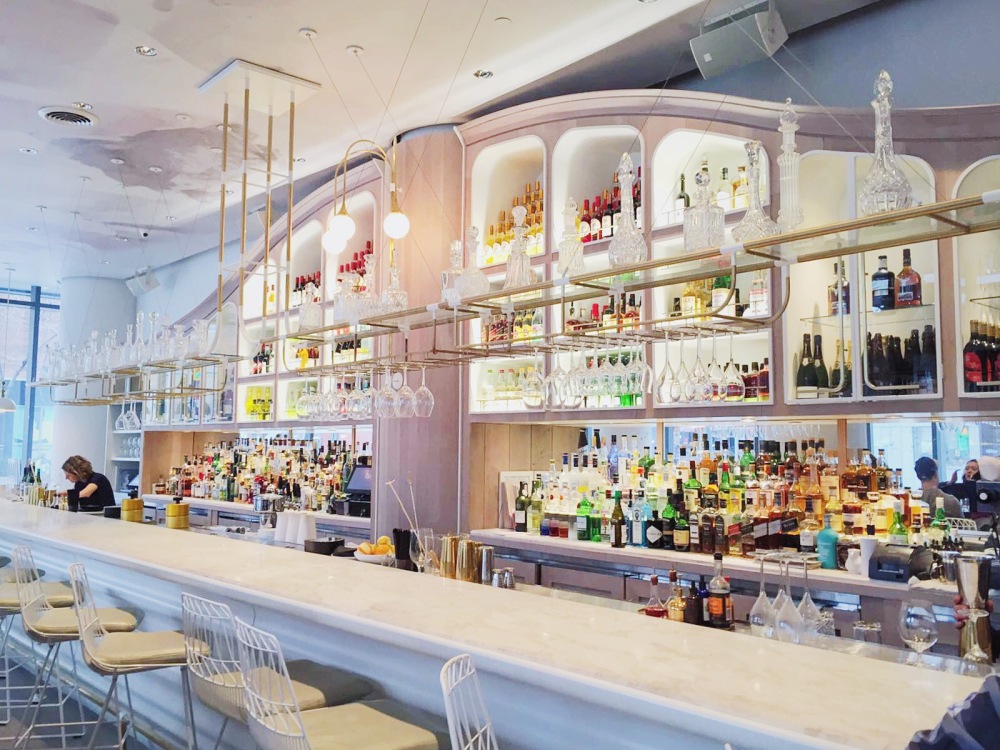 In the last two weeks I’ve actually been here twice, once for brunch and again for dinner so this post will be a little combo deal.

This is definitely not your roll out of bed over to brunch spot.  I was meeting a group of girls to celebrate an occasion and the other diners had definitely taken a minute or two to think of their outfit before heading out the door.  Definitely a spot to consider if you’re trying to impress someone.

Their brunch offering is somewhat minimal with really only 5 classic breakfast style dishes.  The rest of the menu is made up of salads and pizza which I really don’t go for if I’ve come out specifically for brunch.  Out of the 5 options we ended up having 4 between the 10 girls that were there.

Lets just say that I had to ask the waitress for more bread so I could literally wipe the little pot clean.  It was such a simple dish but hearty, spicy, fresh and super filling.  The grilled bread drizzled with olive oil was the perfect pairing.  The creamy poached eggs were a perfect blend with the spicy hearty tomato sauce.  Almost felt like I was having pasta for breakfast.

I had a bite of both the Frittata (cremini mushrooms, spinach, goat cheese, mixed greens, grilled bread) and the Pancakes (maple syrup, mascarpone) and would absolutely come back to try either dish.

So now on to dinner.  This place actually became even more beautiful at night when they just slightly dimmed the lights and made it oh so cozy.

As always I had perused the menu before hand so had an idea of what I wanted.  I had heard ridiculously good things about their house made ricotta and was really craving some good authentic Italian pizza or pasta.  So on the chopping block this evening was:

First up was the House Ricotta.  Good god.  Like if there was a socially respectable way for me to bathe in this ricotta I would.  SO. GOOD.  It was perfectly spreadable, soft and not overtly salty which I often find ricotta leans towards.  The truffle added the perfect richness and the pepper was subtle enough that I didn’t notice but knew it was there.   I literally wanted a baguette but the thin crostini it came with allowed for the ricotta to stand out.  Apparently its made from a recipe that is about 100 years old so I mean how can you go wrong?  We ate it so fast that I didn’t get a picture so thank you Toronto Life for saving the day.

Next up, my buddy and I did sharesies on the pizza and pasta.  Classic move on my part.  The pizza was probably the closest I’ve had to real Italian pizza in a long time.  Having just gone to Italy this summer where I ate pizza like it was its own food group, I got spoiled and nothing measured up when I got back home.  Until this pizza.  Perfectly thin, simple ingredients, no burnt crust.  What else could you ask for.

Next up the gnocchi.  It was actually the first time that I didn’t feel overtly full after eating gnocchi.  It was definitely heavy on the tomatoes and light on the buffalo ricotta but the balance was a welcomed treat.  The tomatoes were chunkier versus saucier giving it a more rustic consistency which I also enjoyed.  I could have probably finished the entire dish on my own.

So overall I had a fantastic experience both at brunch and dinner.  Our service was also really good with the waitstaff being the perfect balance between attentive and leaving you to your meal and company.  The prices are definitely a little more on the high end versus some of your other run of the mill Italian spots in the city but once in a while its nice to splurge.